So I'm attempting it again. We are doing P90X along with the diet plan. I survived my first week and lost 5 lbs. WOOHOO!!! I also started running for my cardio workouts. I ran a mile yesterday in 10 minutes 30 seconds. Today I ran a mile in 9 minutes 45 seconds. WOOOHOO!!!
The non-profit organization I volunteer with is having a 5k in October, and I'm determined to run it. :) Never done anything like that before, so we'll see how it goes. I'll keep you posted on my progress.
Camping this weekend for 4th of July, so I'll post pictures next weekend.
Posted by The Adcock Home at 7:18 PM No comments:

Friday: Taking the in-laws out to a KC favorite

Saturday: Cinnamon Rolls
Taking the in-laws out to a KC favorite

Sunday: Left overs from the weekend
Posted by The Adcock Home at 7:49 PM No comments:

Yall all know how much we love baseball and going to various ballparks. Our goal is to go to all of the ballparks (one day). Well we decided this year we would check out Coors Field in Denver. All of our other ballpark trips have been leave on Friday and come back Sunday. Not this one. We left Kansas City Wednesday after work and got back Monday afternoon. We had a blast, and here are a few of the pictures. (I didn't want to post all 500 of them on here haha). 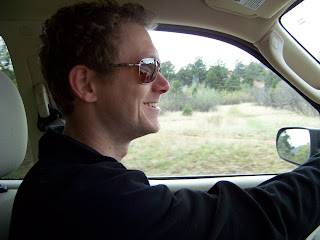 So we left Kansas City about 6:00 pm on Wednesday and drove to the middle of no-where Kansas. This helped break the drive up. I didn't take many driving pictures but don't think that Eric is actually enjoying the drive. I think he was laughing because I was taking a picture of him. Then on Thursday morning we drove to Colorado Springs, CO. 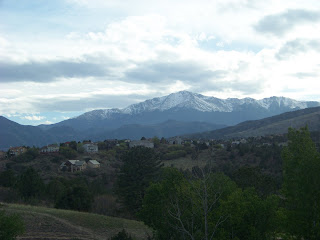 This was the view from our hotel room. Is that not gorgeous!!!! We drove up to Manitou Springs to go in a cave. We didn't take pictures here. We weren't too impressed with the actual cave, but the views from the outside were beautiful. Then we drove over to Garden of the Gods to do some hiking. Now we went all out to prepare for this intense hiking we wanted to do. We bought hiking boots, a camel pack, and a hiking back pack from bass pro shop. 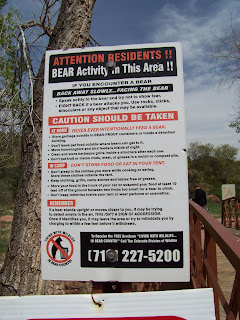 This was the sign near the trail we decided to hike. We didn't see any bears :( 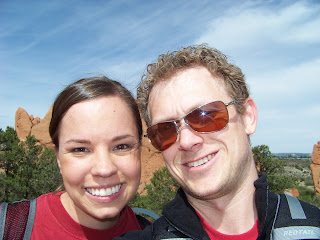 It took us about 2 1/2 hrs to hike about 4 miles. The original trail we were going to take was about 3 miles however we got on a detour. The first part of the trail was awesome. We were climbing over rocks and all sorts. It wasn't just a flat trail. Then Eric saw some lady climbing up something and he wanted to go there, so we got off of our trail to go over there. Well the map we had from the visitor station was different from the maps they had along the trails. Our map had about 3 trails listed where the maps on the trails had about 20. Needless to say we had no idea what trail we were on or which one we needed to get back to the car. haha So it took us a little longer, but we still had fun. 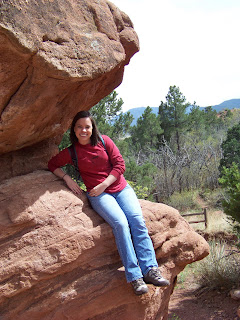 Just taking a break on the rock. 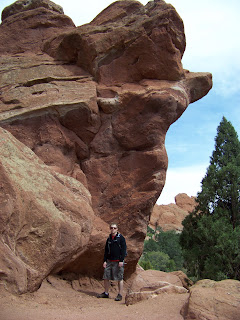 Eric decided he wanted a picture at the top of this rock. 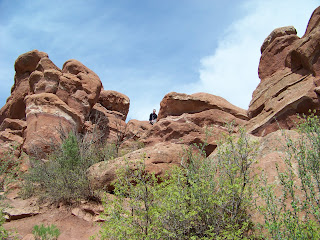 Can you see him up there?

After this adventure we walked through down town Manitou Springs which was a really neat area with a lot of fun shops. Then it was back to the hotel to figure out where we were going to eat dinner. 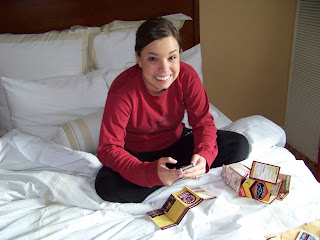 Friday morning we got up and drove back to Manitou Springs. We had coffee at a "hippie" coffee shop. I had some "Mate Drink" which I thought was there way of saying latte. Well my drink definitely did not have coffee in it. I'm not exactly sure what it was but it was good. haha Then we were off to the Cog Railway station to go up Pikes Peak. 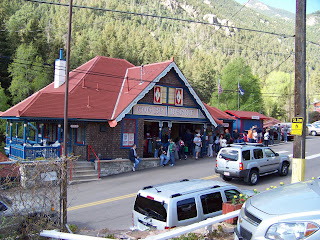 Any time Eric is in charge of the camera, he always seems to snap a picture of me. 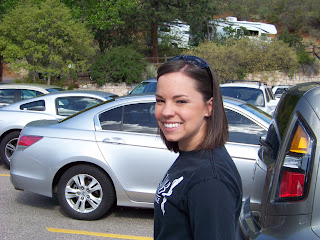 I've learned to just smile so it doesn't become an embarrassing picture of me making a funny face haha. The train ride was about an hour and ten minutes each way. It was nice not having to drive up the curvy roads, but we didn't see any wildlife. 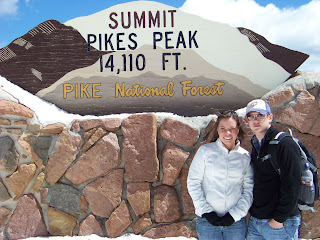 It was so cold up there. I think the wind chill was 10 degrees with wind at 54 mph. We were out there long enough to get pictures and then headed back into the gift shop. 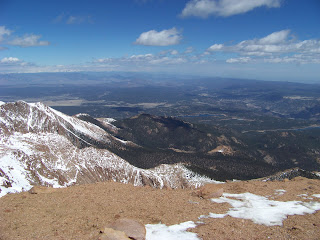 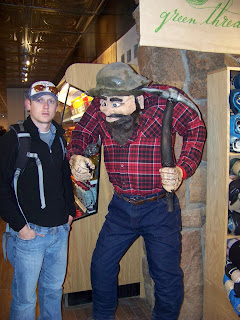 This was inside the gift shop. Doesn't Eric just look thrilled to be there?

After getting back, we drove up to Denver for the main reason for our trip. BASEBALL!!! 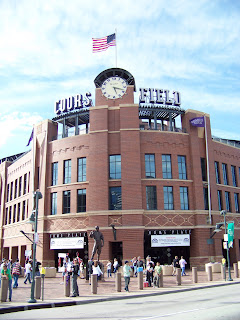 The field is in downtown Denver and had a spectacular view of the mountains in left field. The Rockies were playing St. Louis, so we enjoyed getting to watch Albert Pujols play. Unfortunately, the Rockies lost. It was still a fun game! 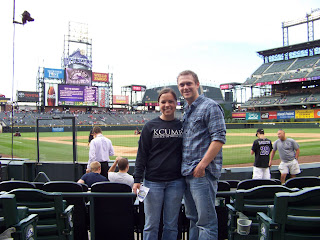 So we always get a picture of us behind home plate when we go to the ballparks. This was still about 30 minutes before the game started. We were walking down and one of the ushers stopped us to see tickets. Eric said well we were just wanting to get pictures, do you mind taking a picture of us. He was an older guy and he said sure why not. Well he took one picture and then he decided it wasn't good enough. He grabbed hold of the arm rest on an isle seat to sit down on the concrete. Well lets just say, gravity worked against him. He fell kind of hard and nearly fell over backwards, but he was very pleased with this picture he took. haha Sweet old man! Thanks! 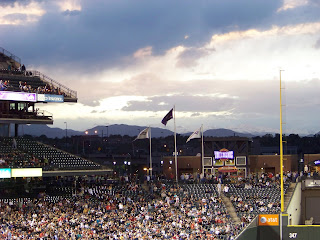 This was the view from our seats of the mountains. Baseball and mountains. :)
Saturday morning we got up and drove north through Boulder up to Estes Park. 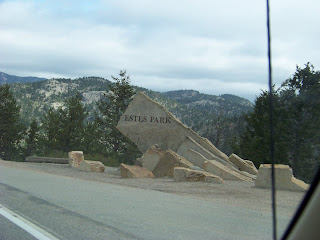 We were wanting to hike through Rocky Mountain National Park, so we were super excited about this part of our trip. Right as we get into Estes Park, Eric spotted a Moose. I was unable to snap a picture of him :( We stopped at the visitor center to get a map and talk about trails. (apparently some of the roads were closed due to snow). We told the Ranger what we were wanting to hike and he asked, how are you with snow? We said that's fine and then he asked if we had snow shoes, um no... Do we need them? He asked what type of shoes and we said waterproof hiking shoes and he looked at us and said you should be fine but if you start getting cold or feel like you can't go just turn around. haha ok 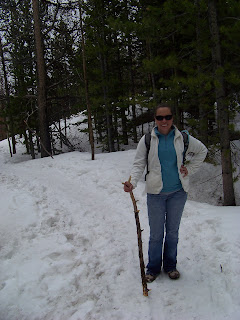 Eric found me a hiking stick right when we got started, so that helped out a lot. You can see the trail behind us. It's just snow.
So we started near Bear Lake on the Glacier Gorge Trailhead. The first part of the trail was fine because the snow was really well packed due to the high traffic. We made it to the first stop, Alberta Falls at 0.8 miles. 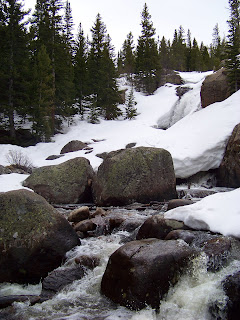 Most people turn around here and don't go on because the next stop was Mills Lake about 2.0 miles out. Since this trail isn't as busy, the snow wasn't as packed. There were times where your foot would just drop into a soft spot. At one point the snow was all the way up to my hip, and I was stuck. I had to have Eric help me out. That was when we decided ok we can't make it any further. 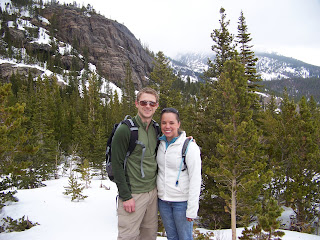 We went about 1.5 miles with an increase in elevation about 850 feet before we decided to turn around. We really enjoyed the hiking, and definitely want to do more hiking. 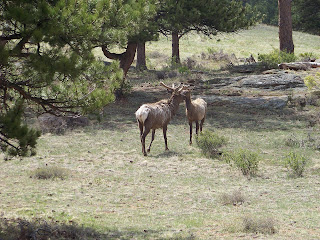 We saw Elk everywhere. We would see them in large herds just like you would see cows out grazing and then you should see a few. We loved seeing them. 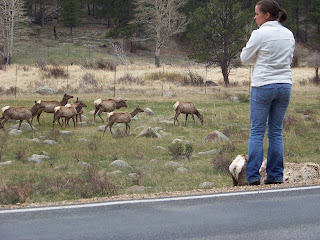 I would usually get out of the car to go get a picture. Eric stayed inside the car to take pictures of me haha. Look how close I was! 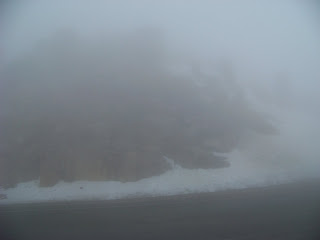 Then we decided to drove up Trail Ridge Road, or how far we could. They had it closed due to the "fog/clouds". This rock was only about 20 feet away, but you couldn't see. There was also about 15 feet of snow on the side of the roads. It was crazy!

Then on Sunday we slept in and took our time to get on the road. Then we drove back to meet some friends in the middle of no where Kansas at the lake to camp Sunday night with them and fish. Unfortunately, the winds were too strong to fish so we just enjoyed camping. This really helped break up the drive. We had so much fun our vacation and definitely want to go back to Estes Park.
Posted by The Adcock Home at 8:33 PM No comments: