The Hardest Thing I've Ever Had To Do! 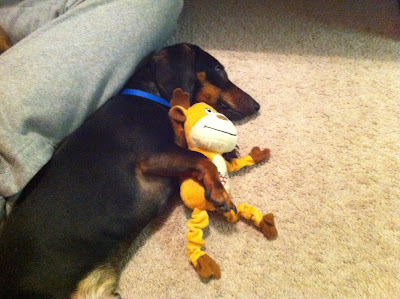 Today was a rough day for the Adcock house hold. I have never had to do something so emotionally difficult. We gave Bauer away. Bauer is our dachshund that I've had since August 2005. He was my baby and helped me get through many lonely nights up here in Kansas City by myself. So here is what happened.

Last night Eric was playing with him on the floor like they always do. For whatever reason, Bauer bit Eric. I guess maybe he felt defensive or vulnerable for whatever reason. He bit Eric on his nose. It was bad enough that we went to an Urgent Care center. He had to get a tetanus shot and prophylactic antibiotics. Luckily he did not need stitches.

This was kind of the last straw for Bauer and his biting. In the last year he has bitten four friends. One was a friend who Bauer has played with many times, and we even stayed with her when I had a busted pipe a year ago. He knew her and she loved him! He then bit Eric's co-worker who came over. He was just washing his hands in the bathroom and Bauer bit his leg. He has also started snapping at us when we try to discipline him or if he gets in trouble.

We had decided that he was for sure gone once we decide to have kids. Well after last night we decided it was time to go. It was the hardest decision and resulted in a TON of tears. I emailed about 15 rescue shelters between last night and this morning. The first response I got back was from a foster home based shelter. She agreed to take him regardless of the bite history. She was up in Polo, MO (about 90 minutes north of us). Eric and I drove up there this morning. Lets just say that was one of the most awkward car rides ever.

The shelter is HALO, Helping All Little Ones. They will board Bauer for a few weeks until he gets comfortable with his new care givers and realize they are the ones taking care of him. They will also start working with obedience training. Once they feel he is safe, he will move on to a foster home. Here they will really work on training until he is safe for adoption. Once he is safe for adoption he will be adopted out.

They feel that the aggression is based on the change in the house hold when I got married including a male and a dog. She thinks this is something that can be overcome with proper training. She will try to get him into a home that is a single person home or husband and wife without kids. They have had a dog with a similar story a few years back and after lots of training is doing great. 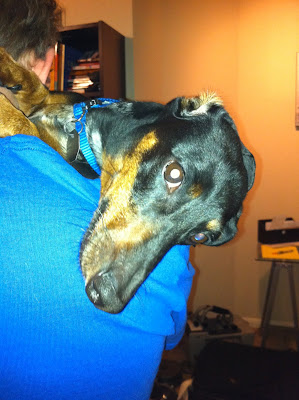 I'm so happy we were able to find a shelter instead of having to do the alternative. I really hope this works out for him as he was my baby. This is such a hard situation for me to be in. I miss him dearly and can't believe he's really gone.
Posted by The Adcock Home at 6:46 PM No comments:

I am happy to say that I have decided on what I want to be when I grow up.
Drum Roll Please.........
I'm going to be a Child Psychiatrist.
Ever since I wanted to go into medicine, I knew that I wanted to do something with kids. I just love the little ones. Well then I really enjoyed my psych lectures and started thinking why not combine the two. I did an elective rotation for a month in Child Psychiatry and loved it! Now you're probably thinking but how can you handle that.
That's the thing. These kids need someone to advocate for them. During my month I saw a wide range of illnesses. I saw a lot of ADHD. I also saw a lot of PTSD from kids who were abused or sexually violated. We had a 16 year old who was addicted to cocaine, in trouble with the law who 2 days prior to his appointment revealed to the rehab center he was at that he was sexually violated by his uncle when we was 7. He had been keeping this a secret for 9 years! I look forward to helping these kids.
Another love of mine is the autism spectrum disorders. I don't know why but those kids just get to my heart. Well I found out about a non-profit organization here in Kansas City, Joshua Center. They see autism, aspergers, tourette syndrome, and ocd. They have a therapist for the kids as well as social skills classes to help these children learn every day things such as phone etiquette, how to have conversations in public, how to react to every day situations, etc. Well I met with the director yesterday, and I'm very excited to start volunteering with this organization. They have a summer camp that I'm going to try and be a counselor for as long as my school schedule permits. I will also attend some social skills classes. Super excited!
It's such a relief to finally know what I want to be when I grow up! Now if only I knew where residency will be.....
Posted by The Adcock Home at 4:14 PM No comments: 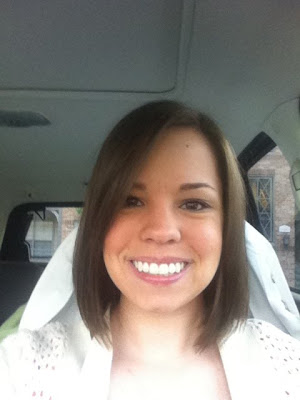 So I made a bold decision this weekend. I chopped my hair off!!! I haven't had it this short since my first two years of college. I am loving this short hair!
I have had two patients this month ask, so what are you 19 or 20? Really!?! I'm hoping the short hair might make me look a little older. We'll see.
What do you think?
Posted by The Adcock Home at 8:00 PM No comments:

Sorry I've been MIA lately. The last rotation was crazy and this one is just as intense, but I do have something exciting to share after a meeting tomorrow. Look for a post tomorrow.

As for meal planning. I've been doing the meal planning bit for awhile now, and we love it! I was able to cut down our weekly grocery bill 33%. I still wanted to find a way to cut down the bill even more without the time requirements of coupons. I don't have the time or patience to clip through coupons and keep them organized until that item goes on sale and then to remember that I have that coupon. haha That's just not me.

A friend introduced me to E-Mealz. It's an online site that posts meal plans along with the grocery list for that week. The meals are created around whatever is on sale at the grocery store you pick. This website does cost $1.25 a week to subscribe. You pay 3 months at a time, and then if you don't want to renew you don't. It has helped me save another 20% on our weekly grocery bill. That means our grocery bill is down 50% from when we started. WOOHOO! I also have gotten some really good recipes from it as well. Check out the website!