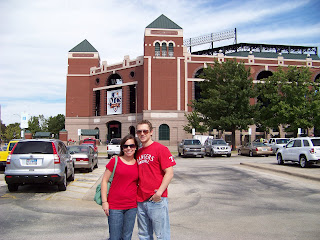 So most of yall know that Eric and I are HUGE Texas Rangers fans. If you didn't know that, now you do. We use to go to games way back when we first started dating 7 1/2 years ago. That was well before they were good, so we didn't just jump on the bandwagon.
Last Tuesday when the Rangers won their first post-season series, we both shed a tear. We were so excited!!!! Eric said, "the smile on my face might just be as big as the one when you walked down the isle." That sure got him a nice look from me. He then responded, "The smile might just be bigger if they win the World Series." WHAT? haha
After they won Tuesday night, we jumped on stub hub to get tickets for the American League Championship Series. Eric and his dad went to so many games growing up just hoping for a good year. They went to a playoff game back in the day. Lets just say they've been waiting for this season for a long time. His parents got us tickets to Saturday's game, so we decided to drive to Dallas for a quick weekend trip. But wait it gets better.
I told Eric I get done on Friday at 12, so maybe we could leave around 3 if you can get off a little early. He looked at me and said, "But the game is at 7 on Friday, and I don't want to miss it." I then responded well we can listen to it on the radio. His response was, "But I want to watch it on tv." (with an ever so cute pouting bottom lip) So we left Kansas City Friday night at 10:45. Yep we drove all through the night, and made it to Greenville at 6:45 am on Saturday. We went to sleep right when we got there and slept until 9:30 am. Then it was time to get ready for the game.
If you didn't know. The Rangers WON Saturday!!!! WOOHOO!!!! It was such an amazing game. Here are some pictures from our quick trip to the ballpark. 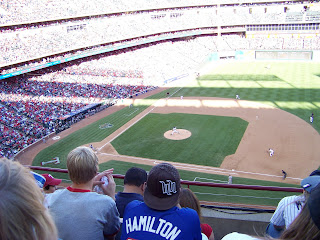 Our seats were on the fourth row of the upper deck. They were really good seats. We could see everything that was going on plus we were in the shade. 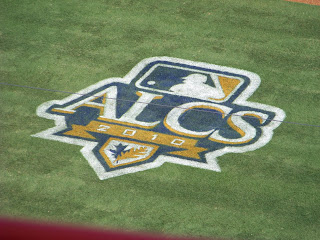 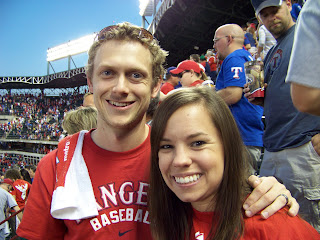 We were super excited that the Rangers won!!! 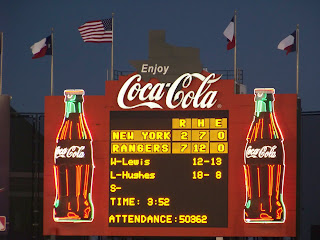 What a great game!
On another note. I think I married Josh Hamilton! haha Not really. I have a little crush on Josh Hamilton. Eric laughs at me. He's an amazing player, and has a really great story. I tell Eric the only reason I have a crush on him is because he has blonde curly hair, blue eyes, and gets hurt running into outfield walls. Eric dislocated his big toe the day I met him trying to make a play in a college baseball game, and Josh Hamilton fractured a couple ribs while trying to make a play at Target Field. Here is a picture of Josh Hamilton for you to compare. Don't you think they look a little bit alike?