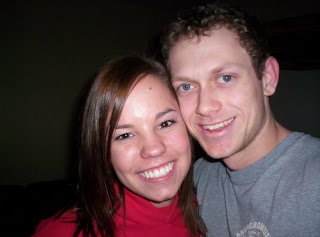 Today marks 100 days until Eric and I get married!! :) After today it's double digits!!!

The picture above is from the moment I knew Eric was the one God created to be my husband. Some of yall know that Eric and I dated while I was in highschool. It wasn't God's timing then, and we broke up when I went off to college. We were no where ready to try the distance. We talked maybe two times in the next two years, but that was it. We went our separate ways. No big deal, I thought things were over.

Then in July 2006 he sent me a text asking to talk. I called him to hear what he had to say, but I wanted nothing to do with him. I had been trying so hard for the past 2 years to get over this guy. I straight up told him I was in a serious relationship with the guy that I thought I would marry (ha boy was I wrong). He simply apologized for the past and said he wish he knew back then that the little things I did was because I loved him. That was the end of things.

Every now and then Eric and I would chat on AIM but that was it. Eric simply just wanted to be my friend which I appreciated. He never once mentioned anything about trying to work things out or get back together. He knew I was in a serious relationship and respected that. Well things with the guy that I thought I loved started to get rocky. He didn't want anything to do with my family, hated driving to Wylie to visit with them. Didn't show that he cared. I remember talking to Eric on AIM about a rocky Thanksgiving situation and all Eric did was apologize. He said, "I put you through enough in High School and I'm sorry to see you get heart broken again." Still Eric never said anything about having feelings for me.

I then realized I was settling for this guy that I thought God had for me. I found this Christian guy that I thought was who God wanted me to marry. I was not happy. I wanted someone who loved me and my family and showed me they cared. I read the book Boy Meets Girl and it was so true. I was hanging onto something that I didn't see going anywhere. We broke up December 2006.

I went on a mission trip to New Orleans with my church January 2007. That was the first time Eric and I had spoken on the phone since our conversation in July 2006. He simply sent a text asking for me to let him know when I made it to New Orleans, he would send me a text in the evening to ask how the mission trip was going and that was that. He just wanted to see how I was doing. He then called me one night to talk on the phone. We just laughed and really caught up on old times. Thats when our friendship really began to grow.

The picture above is from Eric's first trip to Nacogdoches. I was skeptical about this guy. When we dated before, I was his girlfriend when it was convenient for him. He said he wanted to drive out to Nac (3 hours away), I told him I'll believe it when you're here. I wasn't getting my hopes up at all. February 9, 2007 Eric drove to Nacogodches after work. I remember I was leaping for joy the closer he got. When he pulled up in the parking lot at my apartment complex and got out of the car that was the moment I knew he was THE ONE! We had such an awesome weekend, and I enjoyed showing him around town. 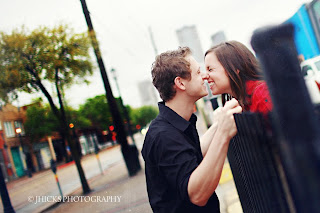 Whenever we are together we are always laughing and smiling. I thank God every single day for working in each of our hearts and allowing us time to grow. I'm so in love with Eric and can't wait to call him my HUSBAND!
Posted by The Adcock Home at 9:27 AM